As a home or business owner, it’s important to have at least a basic understanding of common electrical energy terms as well as electrical equipment. This will help you communicate more effectively with electricians and make informed decisions about electrical power work on your property.

Here are some of the most common terms you’re likely to come across:

This definition is based on Ohm’s law, which states that the current through a conductor is proportional to the potential difference applied to the conductor. The ampere is a SI base unit and relations between other SI units can be expressed in terms of the ampere. For example, the watt, which is the SI unit of power, can be expressed as 1 watt = 1 ampere × 1 volt.

The unit of measurement for electric potential difference, or voltage. Voltage is the force that drives current through a circuit breaker.

Ohm (Ω) is the unit of electrical resistance. Resistance is the opposition to the flow of current. It is named after Georg Ohm, a German physicist who discovered the relationship between voltage and current in an electrical circuit. In 1834, Georg Ohm published his findings in a paper entitled “The galvanic Circuit Investigated Mathematically.” In this paper, he presented his now-famous equation: V = IR. This equation states that the voltage (V) in a circuit is equal to the current (I) multiplied by the resistance (R). Today, the unit of electrical resistance is named after Georg Ohm as a tribute to his groundbreaking work.

The unit of measurement for power. Power is the rate of energy transfer. It is equal to voltage times current. The watt significant SI unit of power and has become the standard unit in electrical circuits worldwide; one watt is equal to one joule per second.

An electronic device that stores and releases electric charge. Capacitors are used to store energy in a circuit.

An electronic device that stores energy in a magnetic field. Inductors are used to oppose changes in current.

A semi-conductor device that amplifies or switches electronic signals and power. Transistors are used in a variety of electronic devices, including radios, televisions, and computers.

A path that electric current can follow. Circuit breakers must be complete in order to function. They must have a source of voltage, a load, and a conductive path between them. It is usually composed of conducting wire or other material (such as semiconductor atoms) that can easily carry the electric current.

Today, a circuit is used in almost every electrical device, from simple radios to complex computers. They play an essential role in our everyday lives.

The opposition to the flow of electric current. Materials with high resistance impede the flow of current, while those with low resistance allow it to flow freely.

A material that easily allows electric current to flow through it. Common conductors include metals such as copper and aluminum.

The system of conductors and other components used to connect electrical devices and systems.

An opening in an electrical system into which devices can be plugged in and connected to the power supply.

There you have it! These are the most common electrical terms that you should know. Understanding these terms will help you to be more informed about your home’s electrical system and how it works.

It is concluded that common electrical terms you should know are ampere, volt, ohm, watt, capacitor, inductor, circuit, resistance, conductor, and wiring. An outlet is an opening in an electrical system into which devices can be plugged and connected to the power supply. These terms are related to each other in some way.

Knowing these terms will help you better understand your home’s electrical system and how it works. Aside from that, one must use electrical safety device when working with electricity.

Welcome to the new hub for Powersource Electric. On this website we 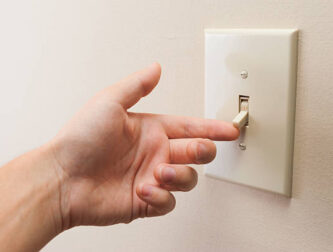 Our Guide To Light Switches And Dimmers